[Opinion] Hmm, I wonder if the active managers picked right?

This post is a bit of fun. I was thinking about two similar companies in South Africa.

Yes, I hear you. There are differences between the two but they are both credit clothing retailers. Stop nitpicking. My thought experiment was as follows: over the very long run, these companies should pretty much perform the same. Good management teams will come and go, buyers will get clothing lines right and buyers will get them wrong from season to season. I was wondering year on year whether the market (read: "clever active managers") prefer one over the other. Namely, is there sometimes a "flavour of the month" element. I don't have a controlled scientific method of testing this (hence my reference to fun). I am using the rolling 12-month price return as a measure.

I mean that at any point in time (i.e. in a particular month) I look back 12 months and see what the percentage change between prices was. I then move on to the next month and do the calculation again.

Active managers will tend to buy which one they prefer and bid the price up. The results are interesting. 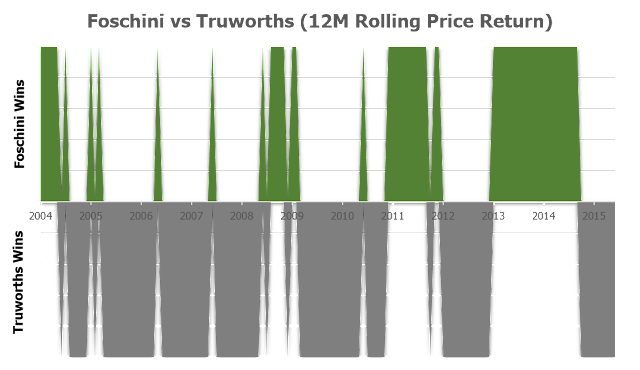