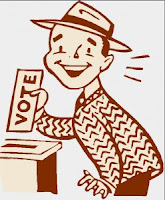 I don't like politics. I don't really trust any politicians - yes, from any party. In fact, I like (and trust) the sum total of one politician. I vote every election because I think it is the right thing to do. We have just had the local elections in SA and I must say (anecdotally, at least) that I haven't seen so many people keen to make their mark.

In order for South Africa to succeed, I believe that there need to be at least two political parties who actually have any power. When one party wins by a landslide, it is not good for the country. In my opinion, leaders in South Africa (from all parties) need to be held accountable. This cannot happen when one party can do as they please with no one watching their every move.

(Aside: the complete opposite to this is Australia where they can't ever seem to elect a majority. They end up having elections every other year. The number of times they have changed Prime Minister would rival most Premier League side managerial shuffles. This is no good either.)

So in short, I think a competitive political landscape is good for South Africa long term. One party will win comfortably this time round but we are slowly seeing a more competitive landscape develop.

Also, someone needs to do something about the number of political parties in SA. I had to fold that ballot paper at least six times. Those poor trees! :)
Posted by gfro_za at 15:26